The turtle laying season runs from October to the end of March. During this time we employ a turtle patrol team. They patrol an 20 km stretch of beach.

The turtle team patrol at night for 3 hours either side of high tide. Often the team is called out by someone in the community who has seen a turtle, or has seen one being captured. When people catch the Leatherback’s they either drag them away from the beach where they become exhausted, or they flip them on their back. Sometimes they tie them up or kill them straight away. If the turtle is still alive we have to get it released, and then help it get to the sea, no easy matter since most of them weigh over 500 kg.

We also relocate the eggs to a safe hatching spot in front of Meet Me There. People and dogs scavenge the eggs so it is important to protect them. 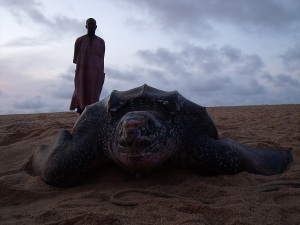 This protection programme will cost the following: 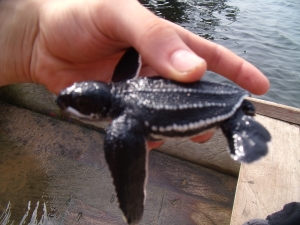 Every penny of this will go into this very poor community. We hire men who previously used to be poachers and train them as guides. This provides employment in an area where there is virtually no employment. As well as this we contribute £5 per turtle protected into the community. This money is used for community education and for community projects. This is our effort to replace the turtle meat that local people have given up which has been considered a significant resource in the past.