This year we had a great season. Leatherbacks reappeared in good numbers, and the wildlife department intervened to support us for the first time in many years. Their support made a considerable difference and saved the lives of many turtles.

This year we came into contact with 93 turtles. This is so much better than the 57 turtles we encountered last year. 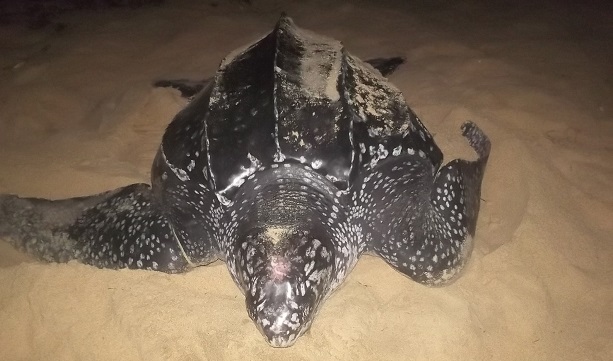 From September to November we had our normal problem of half the turtles appearing on the beach to lay their eggs being killed. In early December the Ghanaian government declared war on all people who kill turtles. Our local wildlife officer, Karim, came to join the turtle team and cautioned everyone locally who is know to be killing turtles. He advised them that if they killed turtles again they would be prosecuted and face up to 10 years in prison.

This had an immediate effect so that the death rates dropped dramatically. I will continue to work with Karim and the wildlife department to encourage them to continue their work locally.

These are the season’s results:

12 known to be killed

14 known to be killed

1 protected (this is the first time this species of turtle has appeared on the coast).

We protected and hid a number of nests, and relocated and protected several hundred eggs. We numbers of baby turtles hatch and we made sure these got into the sea.

This year we found that some of the turtles that were dead seemed to have died from eating plastic.

Here are the results for our Turtle Protection season that ran from October 2015 to March 2016 inclusive.

The turtle protection team patrols an area covering 10 km of beach close to the villages of Dzita and Dzita Agdbledomi in the Volta Region of Ghana where Meet Me There African Home lodge is located. The team was make up of one co-ordinator, two team leaders, and 7 turtle guards.

The team patrols at night when the turtles emerge from the sea and climb onto the beach to lay their eggs. The team knows when the turtles will come ashore, times mostly dictated by the tides, and by the light of the moon.

Once the turtles have laid their eggs the team ensure that they get safely back to the sea. They then dig up the eggs and carefully relocate them to a safe stretch of beach close to Meet Me There. If there are no local people around we cover all traces of the nest, and all turtle tracks and leave the eggs to hatch. If we move the eggs to the safe beach in front of Meet Me there we then keep an eye on the nests and make sure the newly hatched turtles reach the sea.

The World Wildlife Fund reports that “the leatherback turtle has survived for more than a hundred million years, but is now facing extinction. Recent estimates of numbers show that this species is declining precipitously throughout its range”.

I believe that this project can have a considerable impact on turtle numbers.

For me if this species became extinct it would be an absolute tragedy for us all.

The name for this sea turtle is tied to the colour of its shell—an olive green hue. They are the smallest of the sea turtles and currently the most abundant. Their vulnerable status comes from the fact that they nest in a very small number of places, and therefore any disturbance to even one nest beach could have huge repercussions on the entire population.

On the beach we protect we know that large numbers of Olive Ridley are poached off the beach ( they are small enough to carry ) and taken alive to local markets where they are sold, killed and eaten.

It is such a relief to get these beautiful turtles back into the sea. They have so many threats on land, including people, dogs, and exhaustion. I am always so happy to see them return to the ocean. 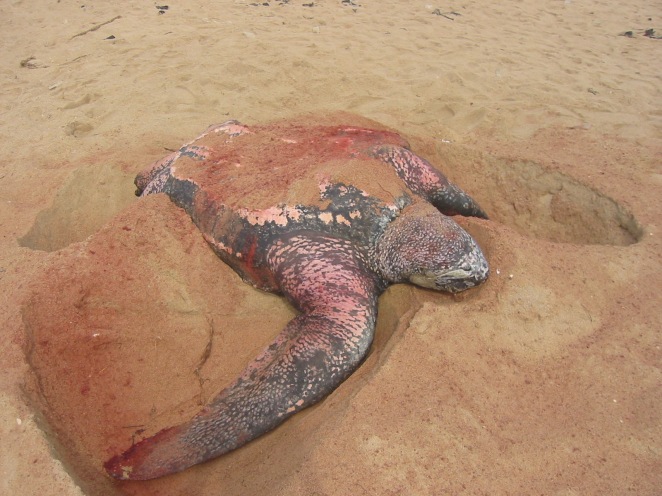 This Leatherback has been caught and turned over on its back. Fortunately we heard about it and were able to get it back on its stomach and return it to the sea.