These are the results for the turtle laying season in the Volta Region of Ghana. The area patrolled covered about 10 km of beach along the coast, close to the villages of Dzita and Dzita Agdbledomi where Meet Me There African Home lodge is located.

This year I was able to raise enough money to employ a team of 10 local people. The funds were very kindly donated, mostly by friends, but also by the British Chelonia Group which Donated £250. The team was make up of one co-ordinator, two team leaders, and 7 turtle guards. 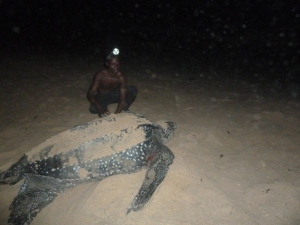 The team patrols at night when the turtles climb onto the beach to lay their eggs. They know when the turtles will come ashore, times mostly dictated by the tides, and the light of the moon.

Once the turtles have laid their eggs the team ensure that they get safely back to the sea. They then dig up the eggs and carefully relocate them to a safe stretch of beach close to Meet Me There. If the eggs were not relocated they would be dug up by dogs, and by local people. We then keep an eye on the eggs and make sure the newly hatched turtles reach the sea. 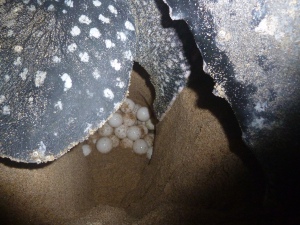 Each turtle lays up to 100 eggs at a time. Leatherback turtles are critically endangered.

The World Wildlife Fund reports that ‘the leatherback turtle has survived for more than a hundred million years, but is now facing extinction. Recent estimates of numbers show that this species is declining precipitously throughout its range’.

I believe that this project can have a considerable impact on turtle numbers. For me if this species became extinct it would be an absolute tragedy for us all.